I studied probabilistic graphical models (PGMs) in an excellent course at ENS with Francis Bach and Guillaume Obozinski, themselves former PhD students of Michael I. Jordan. I was convinced PGMs could have important applications in finance, but not much has been published on this topic so far; Except for Alexander Denev’s book, which is a brilliant exposition on how these models can be useful in finance.

One of the main (soft) teaching of the book, which may disturb machine learners/data scientists/econometricians/statisticians, is that more data is not always relevant. This is particularly true in finance and economy with the environment and associated regulations changing frequently and abruptly. More data, often from further in the past, is barely relevant to model crises which are all different in their own ways, or events which have no historical precedents. Expert judgement is better than irrelevant data in such cases. Moreover, historical data is always backward-looking; Experts can have forward-looking views. The author shows that PGMs are a very practical tool to combine experts’ expectations on many possible scenarios. The book is focused on risk modelling and stress testing, but it is not hard to see how it can be extended for investment and trading purposes.

I think that PGMs should be the ‘pocket calculator’ of discretionary portfolio managers (be it global-macro or corporate fundamentals ones). Many (if not all) think in terms of probabilities of such or such scenario happening. They may think that if such scenario has more than 66% chance of happening, then they will put this trade on. With each new pieces of information arriving, they revise their expectations, and potentially their actions. Many such traders are also skilled poker players. However, the real world is much more complex than the poker rules, and maintaining mentally a consistent view on the probabilities of a large number of scenarios should be close to impossible: Their mental map of marginal and conditional probabilities could actually lead to an impossible joint probability.

The benefits I can see for a PGM ‘pocket calculator’:

In short, PGMs are a good way to merge subjective ‘bayesian’ probabilities from experts, with more ‘objective’ frequentist probabilities estimated from historical relationships in the data, with market implied probabilities (e.g. the probability of default implied by CDS or credit spreads, with the caveat that these implied default probabilities live in the risk-neutral world whereas we are trying to estimate real-world probabilities).

PGMs seem they could be a major quantamental tool for portfolio managers.

The first chapter covers a wide range of topics from the epistemology of risk to the mathematical definitions and properties of Value-at-Risk (VaR), Conditional Value-at-Risk (CVaR) and Credit VaR. It also covers statistical and econometrics limitations such as nonlinearities, structural breaks and outliers. The main point is that PGMs allow for forward-looking scenarios and stress testing whereas standard statistics only allow backward-looking analysis. To study causality, econometrics has only to offer either simplistic tool (Granger causality) or hardly practical ones (SEMs and SVARs), whereas Bayesian networks (having a directed acyclic graph (DAG), a subclass of PGMs) can very intuitively capture causal relationships between variables. They allow to study counterfactuals, hypothetical scenarios (e.g. useful for designing policies as a regulator or a central bank), and, for a given outcome they allow to trace back its associated scenarios (e.g. reverse stress testing).

They all feel terribly old…

In this chapter, you learn the necessary mechanics of probabilistic graphical models. It reads more like a standard graduate textbook, e.g. Probabilistic Graphical Models: Principles and Techniques

There are different types of PGMs:

Each of these PGMs have different properties and modelling benefits/drawbacks associated to their structure.

If causality is the main focus (e.g. interventional queries), Bayesian networks. If mainly associational information is available and of interest, Markov random fields. A mix of both associational and causal information? Chain graphs.

Nodes of the graph are random variables. They can have either a discrete or continuous distribution.

This chapter discusses the possible source of information one can input to such PGMs in the context of financial risk modelling: “[…] knowledge derived from history, so past events (or data sets) are one of the potential ‘repositories’ of future probabilities. Expert domain knowledge either from one person or from aggregate expert surveys can also be used advantageously. Implied information from markets, political polls and physical models in the case of exogeneous variables (floods, oil reserves depletion models) could complement the picture.”

The author classifies these different sources of information in broad categories:

“Once we have a way to build forward-looking distributions through PGMs, we have a myriad potential applications to explore.”

Then, for the rest of the chapter, the author exposes a few examples.

In this chapter, the author demonstrates how PGMs can be useful for asset allocation in presence of structural breaks using the following example: 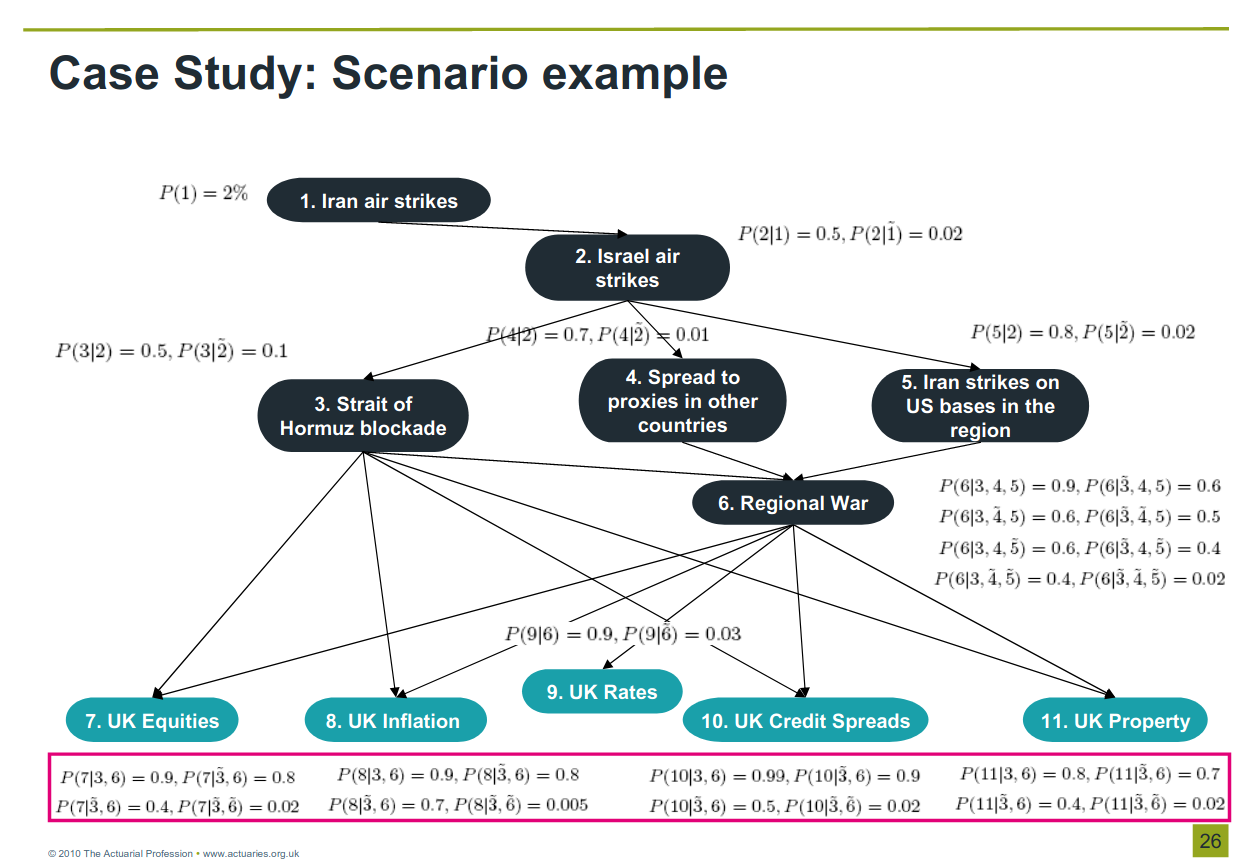 The authors shows how to estimate the loss distribution of a credit portfolio using Bayesian networks.

“In this chapter we give applications of PGMs to the study of networks and network phenomena, such as default contagion […].”

policy makers are currently not only refining the regulatory and institutional set-up, but also looking for new analytical tools that help to better identify, monitor and address sources of systemic risk.

I am quite familiar with this topic, and update frequently a review of two decades of correlations, hierarchies, networks and clustering in financial markets. However, PGMs are barely mentioned in this review (as not much has been published on them and their financial networks applications). Most of the networks between firms investigated are deterministic and estimated from stocks returns correlations or supply chain information; In a few rare cases, using debt or corporate payments (but this information is usually not publicly available, and hard to obtain, even for a regulator). These probabilistic networks should deserve more attention. 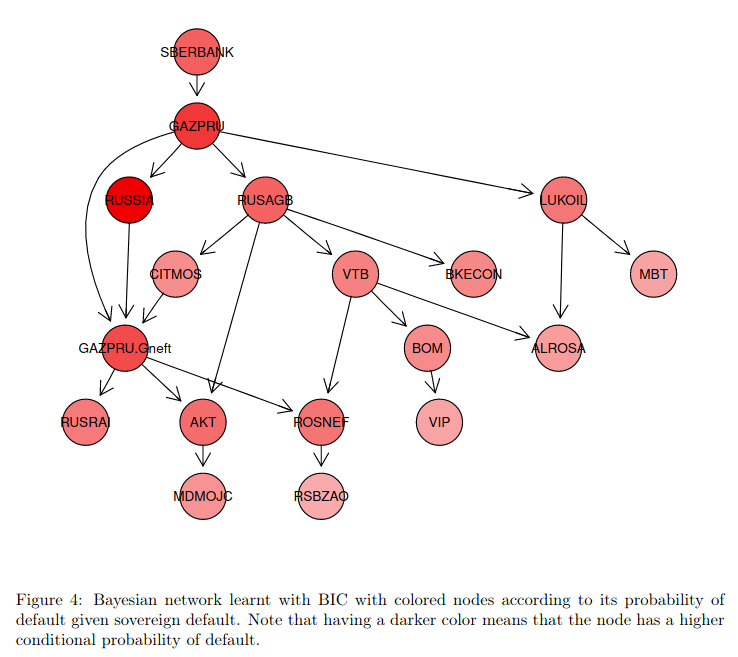 Figure from 'Contagious defaults in a credit portfolio: a Bayesian network approach'

Most often than not, hedges are set in normal times based on historical relationships. However, these relationships may break in stressed times, especially for new types of crises with no historical precedents. PGMs can allow hedging under extreme scenarios since PGMs can give rise to non-zero probability masses in areas where historical data assign a probability of zero. 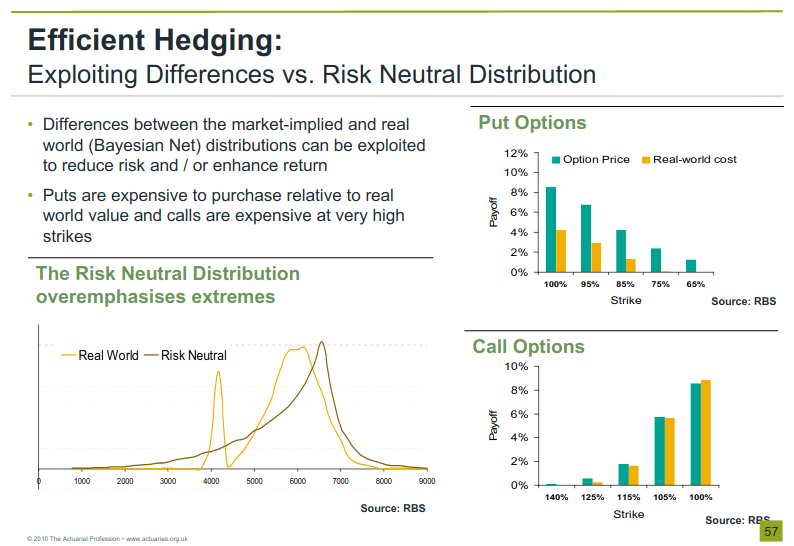 Chapter 9 Case Study: When a Country Is Split

This very relevant chapter shows how one can use PGMs to model a terribly complex and major political event: the independence of Scotland from the UK.

A careful expert analysis stands behind each variable to define the marginal and conditional probabilities.

Another detailed study where the author shows he can estimate the distribution of the PDs (probability of defaults) and LGDs (loss given defaults) of the obligors in the portfolio across many realisations of the macroeconomic variables.

With the model, one can also perform reverse stress tests such as: