Some event stats (copy pasted from the event website):

There was a rich program with several prominent experts in deep learning, optimization and reinforcement learning from both industry (Google, Amazon, Microsoft, Facebook) and academia (University of Montreal, Carnegie Mellon University, University of Edinburgh/KAUST, etc.), cf. the detailed program containing links to slides and websites and the speaker/guest list.

After introductory talks by Ecole Polytechnique president (Jacques Biot) and main organizer of this summer school (Emmanuel Bacry), Yoshua Bengio (one of the father of modern deep learning, with Yann LeCun and Geoffrey Hinton) had a first introductory talk on Deep Learning entitled Deep Learning for AI followed by a series of other talks (Backpropagation, Deep Feedforward NN, Tricks and Tips, RNN and NLP). His talks were quite general and about the state of the art of good practices (tricks and tips), what can be done currently with deep neural networks, what’s hot in research, and the next frontier.

Then a talk on Reinforcement Learning by Sean Meyn Hidden Theory and New Super-Fast Algorithms with a strong perspective from stochastic approximation. Very technical talk. I did not understand much and I am pretty confident that a majority of the public either.

Monday afternoon was focused on data science for smart grids and energy market. I do not know much about this domain yet, so I did not enjoyed it as much as I would have liked to. At the round table, there were prominent speakers such as EDF R&D director.

Pradeep Ravikumar presented a course on probabilistic graphical models (Representation, Inference, Learning). Very similar to the one I followed at the master MVA with Francis Bach and Guillaume Obozinsky (both former PhD students of Michael Jordan). If I find some time I will try to implement and fit some PGM-based yield curve model.

Peter Richtarik did a course on Randomized Optimization Methods.

Stuart Russell (as in the famous ‘Russell and Norvig’ AI book) presented his BLOG approach. He noticed that statistics had for long ignored syntax which is very present in (theoretical) computer science and logic. The two latter fields (CS, logic) had for long been the major approach for AI (cf. IJCAI and AAAI proceedings) and were highlighted in the first editions of his book as such (e.g., graph traversals, prolog). His idea is to couple both statistics and logic. Concretely, introduce stats in a prolog-like language / introduce first-order logic syntax in PGM-like language.

Then a round table on the future of AI. Interesting, but I did not get much new ideas. Stuart Russell gave the impression that he was eager to discuss more in-depth but format of this round table was too short. Many of the mentioned topics are dealt in-depth in gov/parliament/academics related documents (cf. the One Hundred Year Study on Artificial Intelligence (AI100), or for French speakers, the rather exhaustive French Senate report on AI pointing towards the US/EU/UK ones).

To conclude the day, a nice banquet, with pastries by Chef Philippe Conticini.

Finally, Laura Grigori. She works on linear algebra algorithms that minimize the communications as it is really the bottleneck in the highly distributed architectures, e.g. several GPUs. At the moment the gain in speed is sublinear in the number of GPUs due to the algos communication requirement.

A few other noticeable stuff: 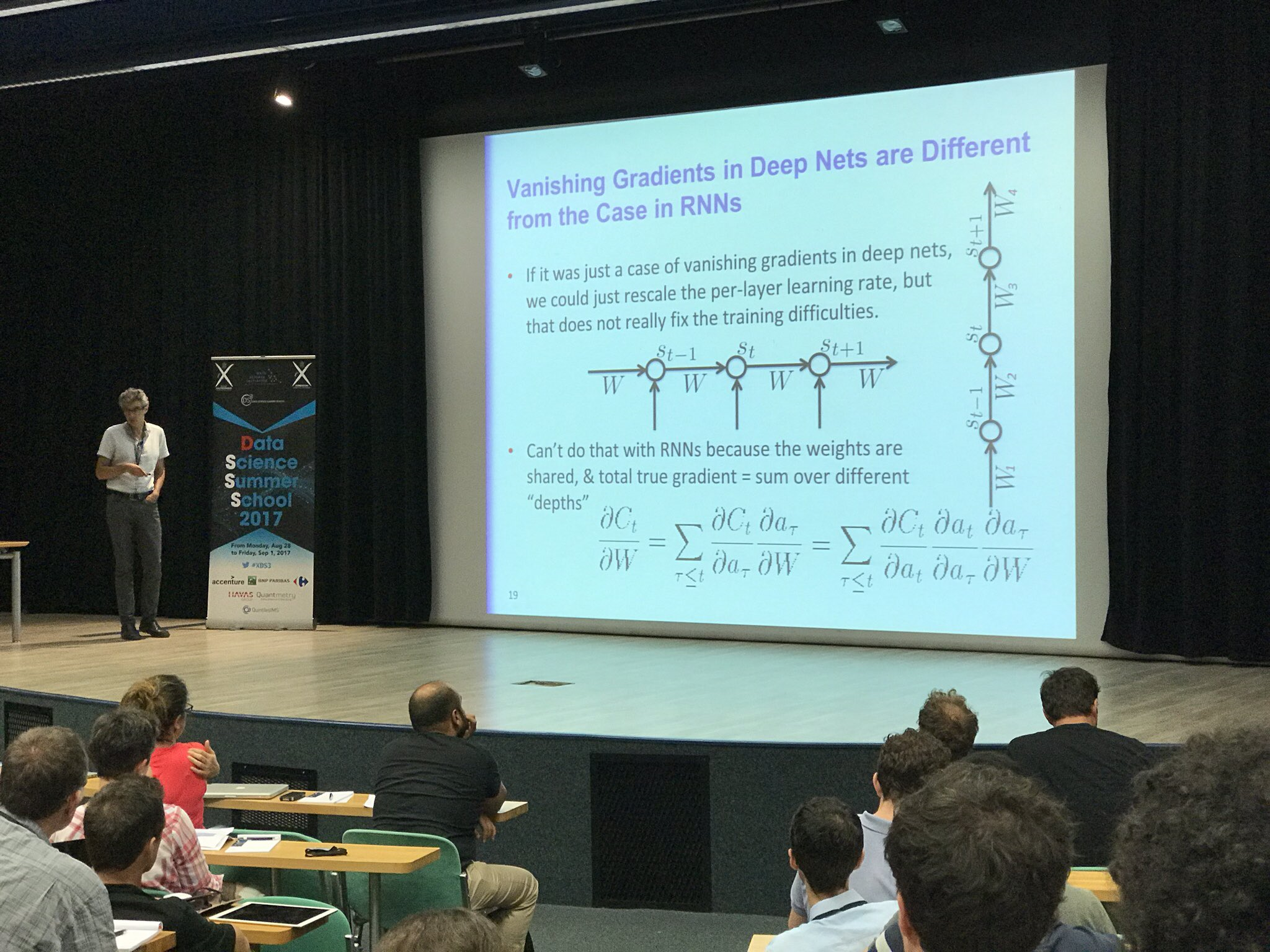